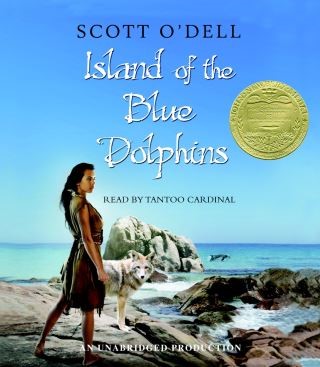 Island of the Blue Dolphins

In the Pacific, there is an island that looks like a big fish sunning itself in the sea. Around it blue dolphins swim, otters play, and sea birds abound. Karana is the Indian girl who lived alone for years on the Island of the Blue Dolphins. Hers is not only an unusual adventure of survival, but also a tale of natural beauty and personal discovery.

Tantoo Cardinal: Scott O'Dell was born in Los Angeles, California, on May 23, 1898. He attended Occidental College, University of Wisconsin-Madison, Stanford University, and University of Rome. He worked as a technical director for Paramount, a cameraman for Metro-Goldwyn-Mayer, and a book editor of a Los Angeles newspaper before serving in the United States Air Force during World War II. The recipient of numerous book awards, he established the Scott O'Dell award for historical fiction in 1981. He died on October 15, 1989.