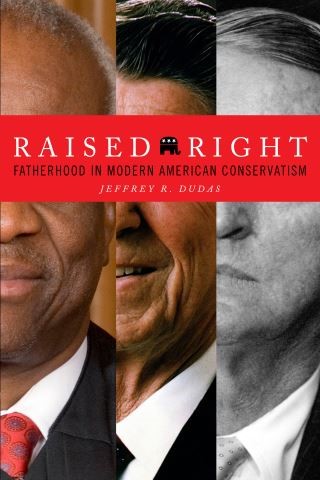 How has the modern conservative movement thrived in spite of the lack of harmony among its constituent members? What, and who, holds together its large corporate interests, small-government libertarians, social and racial traditionalists, and evangelical Christians?

Raised Right pursues these questions through a cultural study of three iconic conservative figures: National Review editor William F. Buckley, Jr., President Ronald Reagan, and Supreme Court Justice Clarence Thomas. Examining their papers, writings, and rhetoric, Jeffrey R. Dudas identifies what he terms a "paternal rights discourse"—the arguments about fatherhood and rights that permeate their personal lives and political visions. For each, paternal discipline was crucial to producing autonomous citizens worthy and capable of self-governance. This paternalist logic is the cohesive agent for an entire conservative movement, uniting its celebration of "founding fathers," past and present, constitutional and biological. Yet this discourse produces a paradox: When do authoritative fathers transfer their rights to these well-raised citizens? This duality propels conservative politics forward with unruly results. The mythology of these American fathers gives conservatives something, and someone, to believe in—and therein lies its timeless appeal.