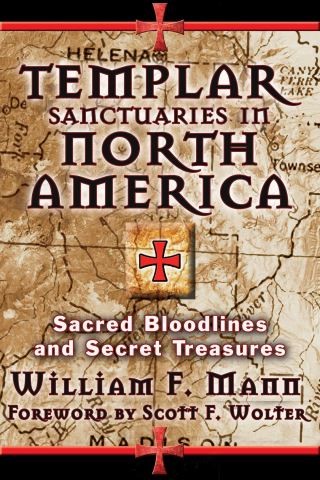 Traces the movement of the Templars’ secret treasure across North America to where it still resides, protected by a sacred lineage of guardians

• Explains how the Templars found refuge with Native American tribes, intermarrying with the Natives to continue the Holy Bloodline and further the lineage of guardians needed to protect their treasure and secrets

• Pinpoints the exact location of the Templar/Holy Bloodline treasure

Many have searched for the lost treasure of the Knights Templar, most famously at Oak Island. But what if the treasure wasn’t lost? What if this treasure--necessary to sanctify the Temple of Solomon and create a New Jerusalem--was moved through the centuries and protected by a sacred lineage of guardians, descendants of Prince Henry Sinclair and the Native American tribes who helped him?

Drawing on his access as Grand Archivist of the Knights Templar of Canada and his own role as a descendant of both Sinclair and the Anishinabe/Algonquin tribe, William Mann examines new evidence of the Knights Templar in the New World long before Columbus and their mission to protect the Holy Bloodline of Jesus and Mary Magdalene. He reveals the secret settlements they built as they moved westward across the vast wilderness of North America, evading the European Church and Royal Houses. He explains how the Templars found refuge in the Sacred Medicine Lodges of the Algonquins, whose ceremonies and rituals bear striking resemblance to the initiations of Freemasonry. He reveals the strategic intermarriages that took place between the Natives and the Templars, furthering the Holy Bloodline and continuing the lineage of blood-guardians. The author explores how Sinclair’s journey from Nova Scotia across America also served to reactivate the sacred rose lines of North America through the building of “rose castles” and monuments, including the Newport Tower and the Kensington Rune Stone.

Pinpointing the exact location of the Templar treasure still hidden in North America, the author also reveals the search for Templar sanctuaries to be the chief motivation behind the Lewis and Clark expedition and the murder of Meriwether Lewis.

William F. Mann: William F. Mann is an officer of the Knights Templar of Canada’s Grand Executive Committee, a member of its Grand Council, and serves as the Sovereign Great Priory’s Grand Archivist. The author of The Knights Templar in the New World and The Templar Meridians, he lives in Milton, Ontario, Canada. Scott F. Wolter is the host of H2’s America Unearthed.