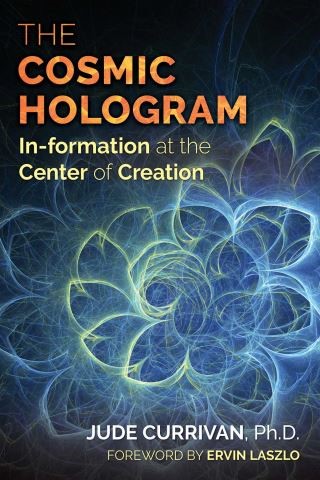 In-formation at the Center of Creation

How holographic patterns of information underlie our physical reality

• Explains how consciousness is a major component of the cosmic hologram of information, making us both manifestations and co-creators of our reality

Our understanding of the Universe is about to transform at all levels, from the tiniest Planck scale to the vast reaches of space. Recent scientific discoveries show that the information that upholds all of our modern technologies is exactly the same as the universal in-formation that underpins, pervades, and is all we call physical reality.

Exploring how information is more fundamental than energy, matter, space, or time, Jude Currivan, Ph.D., examines the latest research across many fields of study and many scales of existence to show how our Universe is in-formed and holographically manifested. She explains how the fractal in-formational patterns that guide behavior at the atomic level also guide the structure of galactic clusters in space. She demonstrates how the in-formational relationships that underlie earthquakes are the same as those that play out during human conflicts. She shows how cities grow in the same in-formational ways that galaxies evolve and how the dynamic in-formational forms that pervade ecosystems are identical to the informational structures of the Internet and our social behaviors. Demonstrating how information is physically real, the author explores how consciousness connects us to the many interconnected layers of universal in-formation, making us both manifestations and co-creators of the cosmic hologram of reality. She explains how Quantum Mechanics and Einstein’s Theory of Relativity can at last be reconciled if we consider energy-matter and space-time as complementary expressions of information, and she explores how the cosmic hologram underlies the true origin of species and our own evolution.

Concurring too with ancient spiritual wisdom, the author offers solid evidence that consciousness is not something we “have” but the fundamental nature of what we and the entire Universe are. With this understanding, we can each transform our own lives and help co-create and in-form the world around us.

Jude Currivan: Jude Currivan, Ph.D., is a cosmologist, futurist, planetary healer and previously one of the most senior business women in the UK. She has a master’s degree in physics from Oxford University and a doctorate in archaeology from the University of Reading in the UK. She has traveled extensively, worked with wisdom keepers from many traditions, and is a life-long researcher into the nature of reality. She is the author of 6 books, including The Cosmic Hologram, and is a member of the Evolutionary Leaders circle.Ervin Laszlo is a philosopher and systems scientist. Twice nominated for the Nobel Peace Prize, he has published more than 75 books and over 400 articles and research papers. The subject of the one-hour PBS special Life of a Modern-Day Genius, Laszlo is the founder and president of the international think tank the Club of Budapest and of the prestigious Laszlo Institute of New Paradigm Research. The winner of the 2017 Luxembourg Peace Prize, he lives in Tuscany. In 2019, Ervin Laszlo was cited as one of the "100 Most Spiritually Influential Living People in the World" according to Watkins Mind Body Spirit magazine.