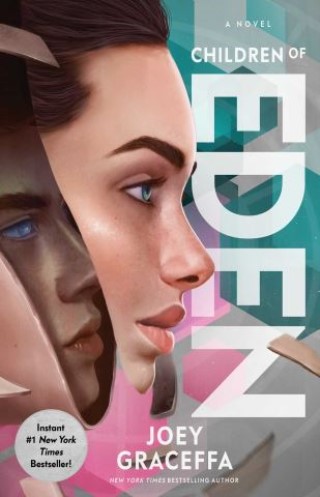 The electrifying #1 New York Times bestselling debut novel from YouTube sensation Joey Graceffa dares to ask the question: What would you do in order to survive if your very existence were illegal?

Rowan is a second child in a world where population control measures make her an outlaw, marked for death. She can never go to school, make friends, or get the eye implants that will mark her as a true member of Eden.

Outside of Eden, Earth is poisoned and dead. All animals and most plants have been destroyed by a man-made catastrophe. Long ago, the brilliant scientist Aaron Al-Baz saved a pocket of civilization by designing the EcoPanopticon, a massive computer program that hijacked all global technology and put it to use preserving the last vestiges of mankind. Humans will wait for thousands of years in Eden until the EcoPan heals the world.

As an illegal second child, Rowan has been hidden away from the ruthless Center government in her family’s compound for sixteen years. Now, desperate to see the world, she recklessly escapes for what she swears will be only one night of adventure. Though she finds an exotic world, and even a friend, the night leads to tragedy. Soon Rowan becomes a renegade on the run.

An instant #1 New York Times bestseller, Children of Eden is a thrilling and completely absorbing work from one of social media’s brightest young storytellers. Taking the genre of dystopian fiction far beyond where it has traveled before, viral sensation Joey Graceffa’s first novel introduces us to an empowering and endearing young protagonist and a world that contains as many perils as it does illuminating surprises, perfect for fans of the Divergent and Maze Runner series.

Joey Graceffa: Joey Graceffa is a leading digital creator, actor, and producer, best known for his scripted and vlog work with YouTube. He is the author of the instant New York Times bestselling memoir In Real Life: My Journey to a Pixelated World and the bestselling novels Children of Eden and its sequel Elites of Eden. In 2013, he produced and starred in his own Kickstarter–funded supernatural series, Storytellers, for which he won a Streamy Award. In 2016, he debuted Escape the Night, a “surreality” competition series for YouTube Red that returned for a third season in the summer of 2018. Joey’s other interests include a proprietary accessories/home décor line called Crystal Wolf and supporting various nonprofit organizations for literacy, children’s health and wellness, and animal welfare. For more information, please visit ChildrenofEdenBook.com.