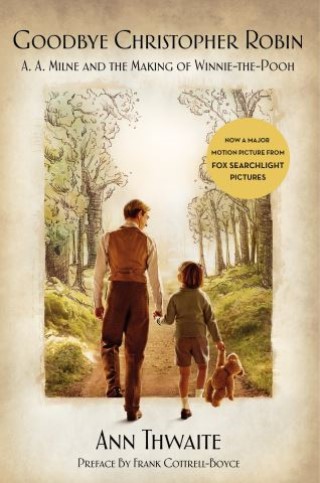 A. A. Milne and the Making of Winnie-the-Pooh

Goodbye Christopher Robin: A.A. Milne and the Making of Winnie-the-Pooh is drawn from Ann Thwaite’s Whitbread Award-winning biography of A. A. Milne , one of England’s most successful writers. After serving in the First World War, Milne wrote a number of well-received plays, but his greatest triumph came when he created Winnie-the-Pooh, Piglet, Tigger, Eeyore and, of course, Christopher Robin, the adventurous little boy based on his own son. Goodbye Christopher Robin inspired the film directed by Simon Curtis and starring Domhnall Gleeson, Margot Robbie and Kelly Macdonald. It offers the reader a glimpse into the relationship between Milne and the real-life Christopher Robin, whose toys inspired the magical world of the Hundred Acre Wood. Goodbye Christopher Robin is a story of celebrity, a story of both the joys and pains of success and, ultimately, the story of how one man created a series of enchanting tales that brought hope and comfort to an England ravaged by the First World War.

Ann Thwaite is a Whitbread-Prize-winning biographer and children’s writer. She was born in London and was educated at Queen Elizabeth’s, Barnet and St Hilda’s College, Oxford. She has written several major biographies. A. A. Milne: His Life won the Whitbread Biography of the Year in 1990. She is a Fellow of the Royal Society of Literature and an Honorary Fellowof Roehampton University (National Centre for Research into Children’s Literature). She holds an honorary doctorate from the University of East Anglia and a D.Litt from Oxford. She lives in Norfolk with her husband, the poet Anthony Thwaite.

Frank Cottrell-Boyce is the co-writer of the screenplay for Goodbye Christopher Robin.