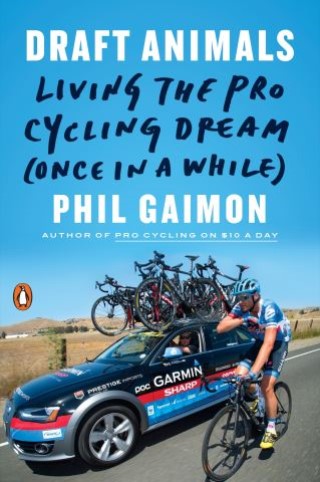 Living the Pro Cycling Dream (Once in a While)

From the author of the cult favorite Pro Cycling on $10 a Day and Ask a Pro, the story of one man’s quest to realize his childhood dream, and what happened when he actually did it.

Like countless other kids, Phil Gaimon grew up dreaming of being a professional athlete. But unlike countless other kids, he actually pulled it off. After years of amateur races, hard training, living out of a suitcase, and never taking “no” for an answer, he finally achieved his goal and signed a contract to race professionally on one of the best teams in the world.

Now, Gaimon pulls back the curtain on the WorldTour, cycling’s highest level. He takes readers along for his seasons in Europe, covering everything from rabid, water-bottle-stealing Belgian fans, to contract renewals, to riding in poisonous smog, to making friends in a sport plagued by doping. Draft Animals reveals a story as much about bike racing as it is about the never-ending ladder of achieving goals, failure, and finding happiness if you land somewhere in-between.

Phil Gaimon: Phil Gaimon retired from laziness and computer games in 2004 and began riding a bike to lose weight. Now, after a long career as a pro cyclist, including two years in the WorldTour, he’s dedicated himself to sharing joy—through books, a cookie-themed Fondo in Malibu, Strava hunts on a YouTube channel, and podcasts.