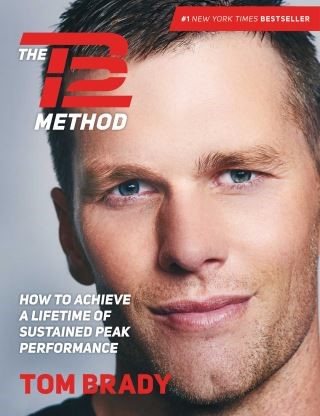 How to Achieve a Lifetime of Sustained Peak Performance

In modern sports, some athletes have managed to transcend their competition in a way that no one will ever forget: Jordan. Jeter. Ali. Williams. These elite legends have changed the game, achieved the unthinkable, and pushed their bodies to unbelievable limits. Joining their exclusive ranks is Tom Brady.

“Brady is the healthiest great champion the NFL has ever had, both physically and mentally” (Sally Jenkins, The Washington Post). The longtime New England Patriots quarterback, who in 2017 achieved his fifth Super Bowl win and fourth Super Bowl MVP award, is widely regarded as an athlete whose training and determination pushed him from a mediocre draft position to the most-revered and respected professional football player of his generation.

In The TB12 Method, Tom Brady explains how he developed his groundbreaking approach to long-term fitness, presenting a comprehensive, step-by-step guide to his personal practice. Brady offers the principles behind pliability, which is at the heart of a new paradigm shift and movement toward a more natural, healthier way of exercising, training, and living—and one that challenges some commonly held assumptions around health and wellness. Filled with lessons learned from Brady’s own peak performance training, and step-by-step action steps to help readers develop and maintain their own peak performance, The TB12 Method also advocates for more effective approaches to strength training, hydration, nutrition, supplementation, cognitive fitness, recovery, and other lifestyle choices that dramatically decrease the risk of injury while amplifying and extending performance, as well as quality of life.

After using his methods for over a decade, Brady believes that the TB12 approach has made him—and can make any athlete, male or female, in any sport and at any level—achieve their own peak performance. With instructions, drills, photos, in-depth case studies that Brady himself has used, as well as personal anecdotes and experiences from on and off the field, The TB12 Method is the only book an athlete will ever need, a playbook from Brady himself that will change the game.

Tom Brady: Tom Brady is the quarterback and offensive captain of the New England Patriots, a team he has played for since 2000. During his time with the team, he has won six Super Bowls, and in four of them was named MVP (Super Bowl XXXVI, XXXVIII, XLIX, and LI). Additionally, he has won three league MVP awards (2007, 2010, and 2017), has been selected to fourteen Pro Bowls, and has led the New England Patriots, to more division titles (17) than any other quarterback in NFL history. Brady ranks second all-time in career passing yards and second in career touchdown passes. With a career postseason record of 30–11, he has won more playoff games than any other quarterback, and appeared in more playoff games than any player at any position. He was named one of the NFL's 100 Greatest Players during the league's 50th anniversary celebration in 2019.