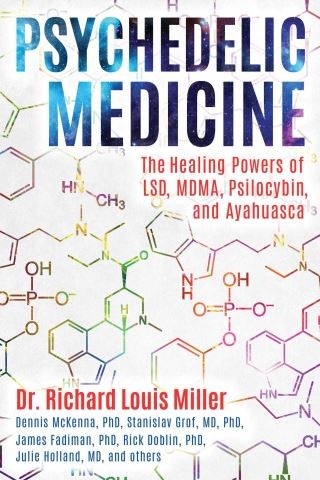 The Healing Powers of LSD, MDMA, Psilocybin, and Ayahuasca

Explores the potential of psychedelics as medicine and the intersections of politics, science, and psychedelics

• Explores the tumultuous history of psychedelic research, the efforts to restore psychedelic therapies, and the links between psychiatric drugs and mental illness

• Offers non-technical summaries of the most recent, double-blind, placebo-controlled studies with MDMA, psilocybin, LSD, and ayahuasca

Dr. Miller and his contributors cover the tumultuous history of early psychedelic research brought to a halt 50 years ago by the U.S. government as well as offering non-technical summaries of the most recent studies with MDMA, psilocybin, LSD, and ayahuasca. They explore the biochemistry of consciousness and the use of psychedelics for self-discovery and healing. They discuss the use of psilocybin for releasing fear in the terminally ill and the potential for MDMA-assisted psychotherapy in the treatment of PTSD. They examine Dr. Charles Grob’s research on the indigenous use and therapeutic properties of ayahuasca and Dr. Gabor Mate’s attempt to transport this plant medicine to a clinical setting with the help of Canada’s Department of National Health.

Dr. Miller and his contributors explore the ongoing efforts to restore psychedelic therapies to the health field, the growing threat of overmedication by the pharmaceutical industry, and the links between psychiatric drugs and mental illness. They also discuss the newly shifting political climate and the push for new research, offering hope for an end to the War on Drugs and a potential renaissance of research into psychedelic medicines around the world.

Richard Louis Miller: Dr. Richard Louis Miller, MA, PhD, has been a clinical psychologist for more than 50 years. He is host of the syndicated talk radio show, Mind Body Health & Politics. The founder of the nationally acclaimed Cokenders Alcohol and Drug Program, he has been a faculty member at the University of Michigan and Stanford University, an advisor on the President’s Commission on Mental Health, a founding board member of the Gestalt Institute of San Francisco, and a member of the national board of directors for the Marijuana Policy Project. He lives in Fort Bragg and Wilbur Hot Springs, California.