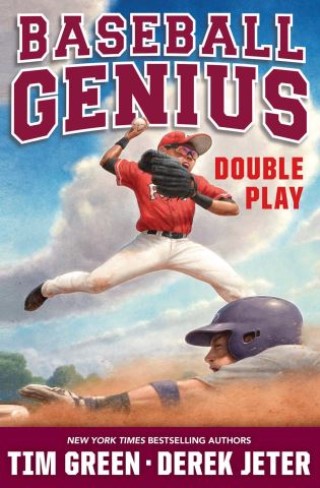 Jalen DeLuca and his hero New York Yankee James “JY” Yager must team up to prove themselves in this sequel to Tim Green and Derek Jeter’s New York Times bestselling novel, Baseball Genius.

Jalen DeLuca loves baseball. He’s playing for his summer travel team and trying to win a regular spot in the rotation. But Jalen’s got more than talent on the field. He’s a baseball genius who can analyze and predict almost exactly what any pitcher is going to do with his next pitch. He can’t quite explain how he knows, he just does. His unique ability helped him save the career of New York Yankee star baseman James “JY” Yager, and now Jalen figures he’ll be almost part of the team. Or will he?

After a power struggle with the Yankees GM and a failed negotiation with Cat, JY strikes out on his own to show he can still hit in the majors without Jalen’s help. Disappointed, but focused on his own baseball career, Jalen tries to carve out his own spot with the Rockton Rockets.

When things go wrong for both of them, JY works out a deal with Cat, bringing the pair together again. With JY’s help, Jalen and Daniel are able to join a travel team from a nearby rival town who will face off against the Rockets in the championship game of an elite tournament in Boston. With the pressure mounting for JY to perform at the Green Monster and Jalen intent on paying back his former team, they’ll have to pull off the ultimate double play if they’re both going to succeed.

Tim Green: Tim Green was a NFL first-round draft pick and a star defensive player for eight years with the Atlanta Falcons. He is the New York Times bestselling author of dozens of books for adults and kids including The Dark Side of the Game, The Fifth Angel, Exact Revenge, Football Genius, Football Hero, Kid Owner, and Left Out. Tim graduated co-valedictorian with a degree in English literature from Syracuse University before earning a law degree with honors. He has been an NFL commentator for FOX Sports and NPR. Tim and his family live in upstate New York. Derek Jeter is a fourteen-time All-Star and five-time World Series winner who played for one team—the storied New York Yankees—for all twenty seasons of his major league career. His grace and class on and off the field have made him an icon and role model far beyond the world of baseball.