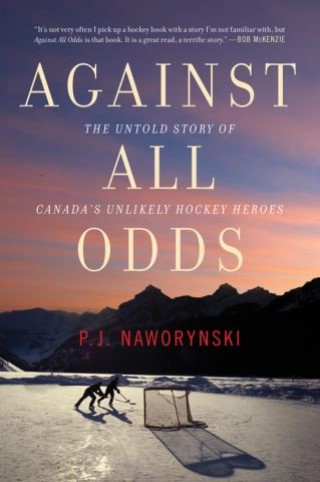 For readers of The Boys in the Boat, the remarkable story of the unlikely Canadian hockey team that clinched Olympic gold in 1948

The announcement was shocking—Canada, the birthplace of hockey, would not be sending a team to the 1948 Winter Olympics in Switzerland. Outraged, a Royal Canadian Air Force squadron leader, Sandy Watson, quickly assembled a team of air force hockey players who were “amateur enough” to complete under the Olympic guidelines.

Sergeant Frank Boucher was recruited to coach the team and begin the cross-Canada search for players. Hubert Brooks, a decorated flying officer and serial escapist from POW camps, was another early recruit. Andy Gilpin joined from the RCAF base in Whitehorse, as did airmen from Quebec, the Maritimes and western Canada. And when their starting goalie, Dick Ball, didn’t pass a medical exam, Murray Dowey was called up from his job as a TTC driver and occasional practice goalie for the Toronto Maple Leafs.

The ragtag team got off to a rough start, losing so many exhibition games that Canadian newspapers called them a disgrace to the country. But the RCAF Flyers battled back, and Boucher’s defensive strategy paid off. They eliminated the American team, tied the Czech team and beat the Swiss as the hometown crowd pelted the Canadians with snowballs during the game. On the same ice where Barbara Ann Scott won a gold medal, the underdog RCAF Flyers also won Olympic gold, and their goalie, Murray Dowey, set an Olympic record that still stands.

Against All Odds is the inspiring untold story of a group of determined men, fresh from the battlefields of WWII, who surprised a nation and the world.

P. J. NAWORYNSKI is a Gemini Award–winning director, writer and series producer specializing in high-end episodic projects. With twenty years of experience, he has more than a hundred hours of documentary/docudrama programming under his belt. He lives outside of Victoria, BC.