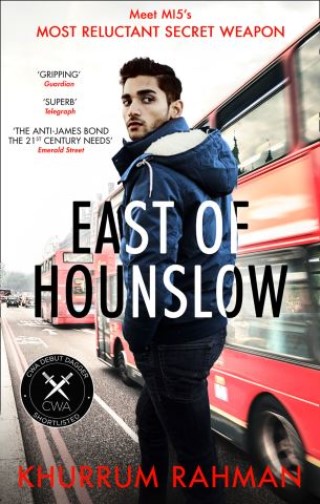 Shortlisted for the CWA John Creasey Debut Dagger Award 2018Shortlisted for the CrimeFest Last Laugh Award 2018‘A brilliant thriller. You’d be mad not to buy this.’ Ben AaronovitchMeet Jay.Small-time dealer.Accidental jihadist.The one man who can save us all?Javid – call him Jay – is a dope dealer living in West London. He goes to mosque on Friday, and he’s just bought his pride and joy – a BMW. He lives with his mum, and life seems sweet.But his world is about to turn upside-down. Because MI5 have been watching him, and they think he’s just the man they need for a delicate mission.One thing’s for sure: now he’s a long way East of Hounslow, Jay’s life will never be the same again.With the edgy humour of Four Lions and the pulse-racing tension of Nomad, East of Hounslow is the first in a series of thrillers starring Jay Qasim.

Khurrum Rahman: Born in Karachi, Pakistan in 1975 Khurrum moved to England when he was one. He is a west London boy and now lives in Berkshire with his wife and two sons.Khurrum is currently working as a Senior IT Officer but his real love is writing. He has a screenplay which has been optioned by a Danish TV producer but is now concentrating on novels. East of Hounslow is his first novel; he is currently working on Homegrown Hero, the second in the Jay Qasim series.