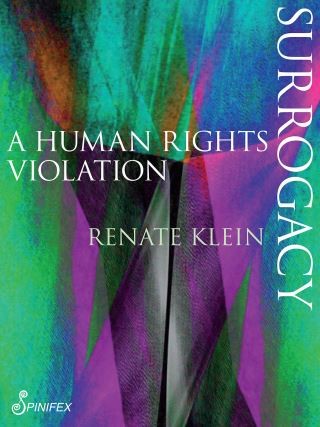 Pared down to cold hard facts, surrogacy is the commissioning/buying/ renting of a woman into whose womb an embryo is inserted and who thus becomes a 'breeder' for a third party. Surrogacy is heavily promoted by the stagnating IVF industry which seeks new markets for women over 40, and gay men who believe they have a 'right' to their own children and 'family foundation'. Pro-surrogacy groups in rich countries such as Australia and Western Europe lobby for the shift to commercial surrogacy. Their capitalist neo-liberal argument is that a well-regulated fertility industry would avoid the exploitative practices of poor countries. Central to the project of cross-border surrogacy is the ideology that legalised commercial surrogacy is a legitimate means to provide infertile couples and gay men with children who share all or part of their genes. Women, without whose bodies this project is not possible are reduced to incubators, to ovens, to suitcases. And the 'product child' is a tradable commodity who has never consented to being a 'take away baby': removed from their birth mother and given to strangers aka 'intended parents'. Still, those in favour of this practice of reproductive slavery speak of 'Fair Trade Surrogacy' and 'responsible surrogacy'. In Surrogacy: A Human Rights Violation Renate Klein details her objections to surrogacy by examining the short- and long-term harms done to the so-called surrogate mothers, egg providers and the female partner in a heterosexual commissioning couple. Klein also looks at the rights of children and compares surrogacy to (forced) adoption practices. She concludes that surrogacy, whether so-called altruistic or commercial can never be ethical and outlines forms of resistance to Stop Surrogacy Now. www.stopsurrogacynow.com It is the global advertising campaigns that groom infertile couples and gay men that have led to the establishment of multibillion cross-border industries: money made literally from women's flesh.

Renate Klein: Dr Renate Klein is a long-term women's health researcher and has written extensively on reproductive technologies and feminist theory over the last thirty years. A biologist and social scientist, she was Associate Professor in Women's Studies at Deakin University in Melbourne where she taught courses on Reproductive Medicine and Feminist Ethics. She is a co-founder of FINRRAGE (Feminist International Network of Resistance to Reproductive and Genetic Engineering) and an original signatory to Stop Surrogacy Now.