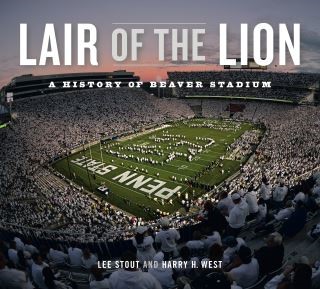 Lair of the Lion

A History of Beaver Stadium

Football is an unmistakable part of the culture of Penn State, though the experience of a Nittany Lions home game—from the crowds and tailgates to the spectacle of the game itself—has changed significantly over the years. This richly illustrated and researched book tells the story of the structure that has evolved along with the university’s celebrated football program: the iconic Beaver Stadium.

Historian Lee Stout and engineering professor Harry H. West show how Beaver Stadium came to be, including a look at its predecessors, “Old” Beaver Field, built in 1893 on a site centrally located northeast of Old Main, and “New” Beaver Field, built on the northwest corner of campus in 1909. Stout and West explore the engineering and construction challenges of the stadium and athletic fields and reveal the importance of these facilities to the history of Penn State and its cherished traditions.

Packed with archival photos and fascinating stories, Lair of the Lion is a celebration of the ways in which Penn State fans, students, and athletes have experienced home games from the 1880s to the present day, and of the monumental structure that the Lions now call home.