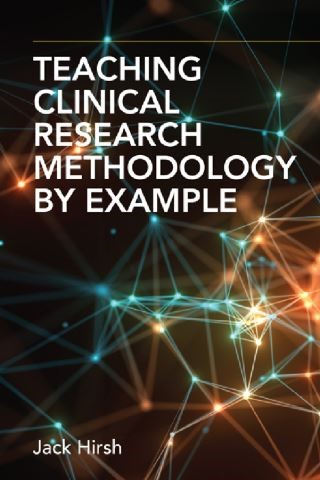 Teaching Clinical Research Methodology by Example has two principal objectives: (1) to tell the story of the research process in action and to provide a glimpse into the minds of the researchers responsible for some of the major advances (and setbacks) in modern medicine; (2) to explain the principles of evidence-based medicine by reviewing the research methods required to prove or disprove a theory.

This text is written in a style accessible to health professionals who do not have a background in clinical epidemiology.

The first section of the book, Causation, begins with an explanation of “casual” and “coincidental” associations and follows with examples:

The second section of the book explores prevention, treatment, and the ethical principles of clinical trials.

Jack Hirsh, MDV, CM, MD, FRCP(C), FRACP, FRSC, DSc: Dr. Jack Hirsh is Professor Emeritus in the Department of Medicine at McMaster University in Hamilton, Ontario. He was the Founding Director of the Henderson Research Centre, and is a former Chairman of the Department of Medicine. He established a thrombosis program at McMaster University that has been pre-eminent in thrombosis research for over three decades and has trained scores of scientists who now head up thrombosis units throughout the world. He was a founding senior scientist of and vice president of Research of Vascular Therapeutics, Inc. After earning both his MBBS and MD degrees at the University of Melbourne Medical School, Australia, he completed subsequent training at Washington University in St. Louis, Missouri, the London Postgraduate Medical School, and the University of Toronto. Dr. Hirsh developed and then investigated diagnostic techniques that have improved and simplified the diagnosis of thromboembolism disorders. He and his colleagues demonstrated the benefit of aspirin in the prevention of stroke. His investigation of heparin and warfarin set the standards for their dosing and clinical use internationally. He also pioneered the standardization of laboratory monitoring and dosing of warfarin, thereby increasing its safety and expanding its use to patients who had been denied the benefit of this oral anticoagulant. His studies contributed to the discovery of unique characteristics of low-molecular-weight heparin and led eventually to the identification of its potential clinical advantages. Dr. Hirsh has authored 231 book chapters, 19 books, and over 700 articles, which have been published in various publications including The New England Journal of Medicine, The Lancet, Circulation, Annals of Internal Medicine, and Journal of Clinical Investigation. Dr. Hirsh has received many national and international awards including awards from the International Society of Thrombosis and Haemostasis, the American Heart Association, the American College of Chest Physicians, the Canadian Heart Foundation, and the American Society of Hematology. He received the Trillium Clinical Scientist Award from the Government of Ontario and the Prix Galien Canada. In 2000, Dr. Hirsh was inducted into the Canadian Medical Hall of Fame, was named to the Order of Canada, and received the Gairdner Foundation International Award for Achievement in Medical Science.