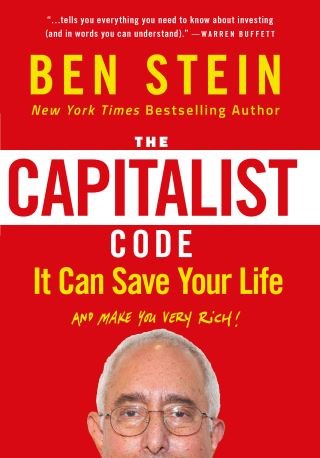 It Can Save Your Life and Make You Very Rich

In his entertaining and informative style that has captivated generations, beloved New York Times bestselling author, actor, and financial expert Ben Stein sets the record straight about capitalism in the United States—it is not the "rigged system" young people are led to believe. As he reveals in The Capitalist Code, "Life can be faced by moaning and complaining or it can be faced by study, work, optimism, and faith in the free capitalist system. Guess which side gets the happier life?"

Most Americans have not inherited wealth or a successful business that could set them up for life. That means most Americans are destined for financial worry and concern for the rest of their lives. Right? Wrong! Ben Stein explains how the wonderful system of stock market capitalism can allow any American to build financial security. In this succinct guide, you will learn:

That's what this book is all about: how to harness the incredible power of the U.S. economy for enjoyment and security by being owners of profitable businesses-by consistent, conservative investment starting as young as possible in a diversified port- folio of stocks. Anyone can be a capitalist—and should be. All it takes is a little bit of knowledge and an even smaller amount of action. All it takes is The Capitalist Code.

Ben Stein: Ben Stein (Los Angeles, CA) is a respected economist who is known to many as a movie and television personality, but has worked more in personal and corporate finance than anywhere else. He has written about finance for Barron's, the Wall Street Journal, the New York Times, and Fortune; was one of the chief busters of the junk-bond frauds of the 1980s; has been a longtime critic of corporate executives' self-dealing; and has cowritten eight finance books. Stein travels the country speaking about finance in both serious and humorous ways, and is a regular contributor to CBS's Sunday Morning, CNN, and Fox News. He was the 2009 winner of the Malcolm Forbes Award for Excellence in Financial Journalism.