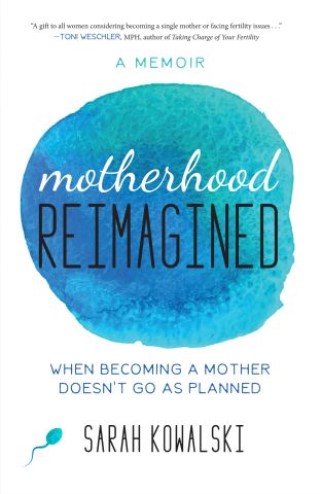 When Becoming a Mother Doesn’t Go As Planned: A Memoir

At the age of thirty-nine, Sarah Kowalski heard her biological clock ticking, loudly. A single woman harboring a deep ambivalence about motherhood, Kowalski needed to decide once and for all: Did she want a baby or not? More importantly, with no partner on the horizon, did she want to have a baby alone? Once she revised her idea of motherhood—from an experience she would share with a partner to a journey she would embark upon alone—the answer came up a resounding Yes. After exploring her options, Kowalski chose to conceive using a sperm donor, but her plan stopped short when a doctor declared her infertile. How far would she go to make motherhood a reality? Kowalski catapulted herself into a diligent regimen of herbs, Qigong, meditation, acupuncture, and more, in a quest to improve her chances of conception. Along the way, she delved deep into spiritual healing practices, facing down demons of self-doubt and self-hatred, ultimately discovering an unconventional path to parenthood. In the end, to become a mother, Kowalski did everything she said she would never do. And she wouldn't change a thing.
A story of personal triumph and unconditional love, Motherhood Reimagined reveals what happens when we release what's expected and embrace what's possible.

Sarah Kowalski: Sarah Kowalski, Esq., is a fertility doula, family building coach, postpartum doula, and author, as well as the founder of Motherhood Reimagined. She is a regular contributor to ESME.com, YourTango.com, and ChoiceMoms.org. As a single mother by choice who conceived her son via sperm and egg donors, she is a go-to guide for women who are contemplating single motherhood, having fertility issues, raising donor-conceived children, or navigating life as single mothers. Kowalski has a BA from UC Berkeley, and she graduated magna cum laude from Santa Clara University Law School in 1998. She left the practice of law to pursue her interests in alternative healing and the mind/body connection by becoming a Guild-Certified Feldenkrais Practitioner, Qigong instructor, and Certified Integral Coach.