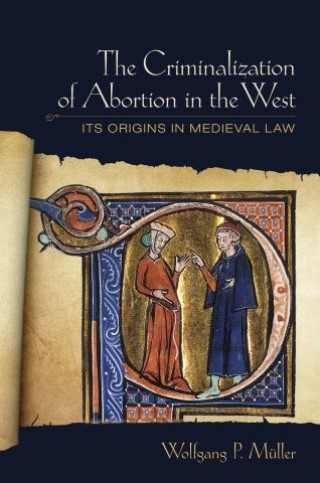 The Criminalization of Abortion in the West

Its Origins in Medieval Law

Anyone who wants to understand how abortion has been treated historically in the western legal tradition must first come to terms with two quite different but interrelated historical trajectories. On one hand, there is the ancient Judeo-Christian condemnation of prenatal homicide as a wrong warranting retribution; on the other, there is the juristic definition of "crime" in the modern sense of the word, which distinguished the term sharply from "sin" and "tort" and was tied to the rise of Western jurisprudence. To find the act of abortion first identified as a crime in the West, one has to go back to the twelfth century, to the schools of ecclesiastical and Roman law in medieval Europe.

In this book, Wolfgang P. Müller tells the story of how abortion came to be criminalized in the West. As he shows, criminalization as a distinct phenomenon and abortion as a self-standing criminal category developed in tandem with each other, first being formulated coherently in the twelfth century at schools of law and theology in Bologna and Paris. Over the ensuing centuries, medieval prosecutors struggled to widen the range of criminal cases involving women accused of ending their unwanted pregnancies. In the process, punishment for abortion went from the realm of carefully crafted rhetoric by ecclesiastical authorities to eventual implementation in practice by clerical and lay judges across Latin Christendom. Informed by legal history, moral theology, literature, and the history of medicine, Müller's book is written with the concerns of modern readers in mind, thus bridging the gap that might otherwise divide modern and medieval sensibilities.

Wolfgang P. Müller is Professor of History at Fordham University. He is the author of Huguccio: The Life, Works, and Thought of a Twelfth-Century Jurist and coeditor of MedievalChurch Law and the Origins of the Western Legal Tradition.