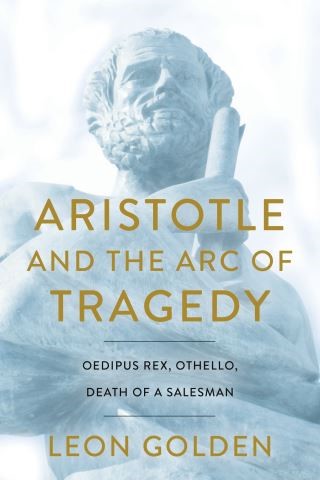 Aristotle and the Arc of Tragedy

Aristotle and the Arc of Tragedy is the latest of Leon Golden’s books to connect Ancient Greece to modern culture. In a world facing many pressing issues Classics professor Golden wants to champion the values and achievements of Classical Civilization. He asserts that Homeric Epic and Greek Tragedy are as relevant today as they were millennia ago because they are riveting and insightful studies of the human condition. Their universality grants them a contemporary relevance despite the passage of time and changes in custom and taste.

In one of his previous books, Understanding the Iliad, Golden illuminated the relevance of The Iliad for modern readers. The Bryn Mawr Classical Review praised Understanding the Iliad because it, “achieves what it sets out to accomplish: to provide an interpretation of the Iliad that emphasizes its didactic aspects, its ability to improve its readers by presenting the spectacle of the evolution of a flawed warrior consumed by destructive anger to a legitimate hero who transcends his narcissism and grandiosity and reaches out to others and by doing so heals his own aching soul in the process.”

Golden, making use of correspondence and personal contact with Joseph Heller, himself, argues convincingly in Achilles and Yossarian that Homer’s The Iliad exerted a profound influence over Heller as he wrote his modern classic, Catch-22. A Kirkus review acclaims Achilles and Yossarian in these words: “Golden combines impressive erudition with a sharp critical eye and a lucid prose style that laymen will find accessible and engaging. The result is an original and persuasive work of literary scholarship that finds much more than mere war stories in these classics.”

Leon Golden: Leon Golden, retired as Emeritus Professor of Classical Languages, Florida State University, Tallahassee, Florida, after 38 years. A noted Classics scholar, Golden's nearly 60-year career involved teaching, research, and publishing on the greatest philosophers, characters, literature, and culture of the ancient Greco-Roman world. Among his numerous publications are In Praise of Prometheus (1966), Aristotle's Poetics (1968), Aristotle: On Tragic and Comic Mimesis (1992), Horace for Students of Literature (1995), Understanding the Iliad (2004), and Achilles and Yossarian (2009). He is a career-long member of the American Philological Association, Archeological Institute of America, Classical Association Midwest and South (president Southern section 1972-74), and Phi Beta Kappa.