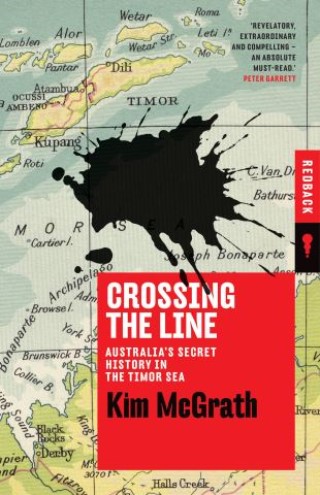 For fifty years, Australia has schemed to deny East Timor billions of dollars of oil and gas wealth.

With explosive new research and access to never-before-seen documents, Kim McGrath tells the story of Australia’s secret agenda in the Timor Sea, exposing the ruthlessness of successive governments. Australia did nothing to stop Indonesia’s devastating occupation of East Timor, when – on our doorstep – 200,000 lives were lost from a population of 650,000. Instead, our government colluded with Indonesia to secure more favourable maritime boundaries.

Even today, Australia claims resources that, by international law, should belong to its neighbour – a young country still recovering from catastrophe and in desperate need of income.

Crossing the Line is a long-overdue exposé of the most shameful episode in recent Australian history.

‘Crossing the Line is an unassailable exposé of Australia’s ruthless pursuit of resources in the Timor Sea. A timely and definitive book.’ —José Ramos-Horta

‘Kim McGrath has trawled the national archives to produce the smoking gun on Australia’s callous betrayal of the people who supported our commandos in World War II, and on the immoral and unlawful appropriation of their oil.’ —Paul Cleary