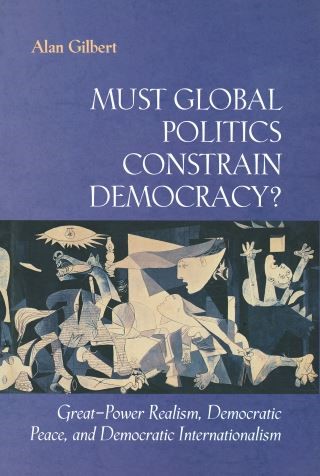 As each power vies for its national interests on the world stage, how do its own citizens' democratic interests fare at home? Alan Gilbert speaks to an issue at the heart of current international-relations debate. He contends that, in spite of neo-realists' assumptions, a vocal citizen democracy can and must have a role in global politics. Further, he shows that all the major versions of realism and neo-realism, if properly stated with a view of the national interest as a common good, surprisingly lead to democracy. His most striking example focuses on realist criticisms of the Vietnam War.

Democratic internationalism, as Gilbert terms it, is really the linking of citizens' interests across national boundaries to overcome the antidemocratic actions of their own governments. Realist misinterpretations have overlooked Thucydides' theme about how a democracy corrupts itself through imperial expansion as well as Karl Marx's observations about the positive effects of democratic movements in one country on events in others. Gilbert also explodes the democratic peace myth that democratic states do not wage war on one another. He suggests instead policies to accord with the interests of ordinary citizens whose shared bond is a desire for peace.

Gilbert shows, through such successes as recent treaties on land mines and policies to slow global warming that citizen movements can have salutary effects. His theory of "deliberative democracy" proposes institutional changes that would give the voice of ordinary citizens a greater influence on the international actions of their own government.

Alan Gilbert: Alan Gilbert is a Professor in the Graduate School of International Studies at the University of Denver. He is the author of Democratic Individuality and Marx's Politics: Communists and Citizens.