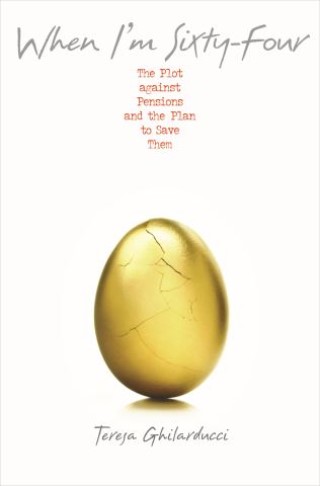 The Plot against Pensions and the Plan to Save Them

A crisis is looming for baby boomers and anyone else who hopes to retire in the coming years. In When I'm Sixty-Four, Teresa Ghilarducci, the nation's leading authority on the economics of retirement, explains how to confront this crisis head-on, revealing the causes behind the increasingly precarious economics of old age in America and proposing a bold plan to guarantee retirement security for every working citizen.

Retirement is one of the hallmarks of a prosperous, civilized market economy. Yet in America today Social Security is on the ropes. Government and employers are dismantling pension security, forcing older people to work longer. The federal government spends billions in exemptions for 401(k)s and other voluntary retirement accounts, yet retirement savings for most workers is falling. Ghilarducci takes an unflinching look at the eroding economic structure of retirement in America--and what she finds is alarming. She exposes the failures of pension regulators and the false hopes of privatized Social Security. She tells the ugly truth about risky 401(k) plans, do-it-yourself retirement schemes, and companies like Enron that have left employees without any retirement savings. Ghilarducci puts forward a sweeping plan to revive the retirement-income system, a plan that will ensure that, after forty years of work, every American will receive 70 percent of their preretirement earnings, guaranteed for life. No other book makes such a persuasive case for overhauling the pension and Social Security system in order to provide older Americans with the financial stability they have earned and deserve.

Teresa Ghilarducci: Teresa Ghilarducci, after having taught economics for twenty-five years at the University of Notre Dame, now holds the Irene and Bernard L. Schwartz Chair of Economic Policy Analysis at the New School for Social Research. She is also the 2006-2008 Wurf Fellow at Harvard Law School. Her books include Labor's Capital: The Economics and Politics of Private Pensions.