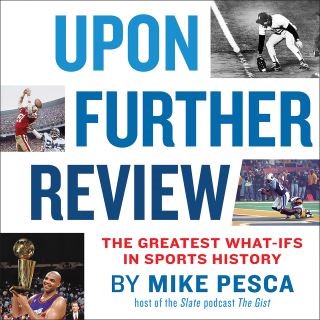 The Greatest What-Ifs in Sports History

"Intriguing...thought provoking...delightful." --The Washington Post
From Mike Pesca, host of the popular Slate podcast The Gist, comes the greatest sports minds imagining how the world would change if a play, trade, injury, or referee's call had just gone the other way.
No announcer ever proclaimed: "Up Rises Frazier!" "Havlicek commits the foul, trying to steal the ball!" or "The Giants Lose the Pennant, The Giants Lose The Pennant!" Such moments are indelibly etched upon the mind of every sports fan. Or rather, they would be, had they happened. Sports are notoriously games of inches, and when we conjure the thought of certain athletes - like Bill Buckner or Scott Norwood - we can't help but apply a mental tape measure to the highlight reels of our minds. Players, coaches, and of course fans, obsess on the play when they ask, "What if?" Upon Further Review is the first book to answer that question.
Upon Further Review is a book of counterfactual sporting scenarios. In its pages the reader will find expertly reported histories, where one small event is flipped on its head, and the resulting ripples are carefully documented, the likes of...

What if the U.S. Boycotted Hitler's Olympics?

What if Bucky Dent popped out at the foot of the Green Monster?

What if Drew Bledsoe never got hurt?

Upon Further Review takes classic arguments conducted over pints in a pub and places them in the hands of dozens of writers, athletes, and historians. From turning points that every sports fan rues or celebrates, to the forgotten would-be inflection points that defined sports, Upon Further Review answers age old questions, and settles the score, even if the score bounced off the crossbar.