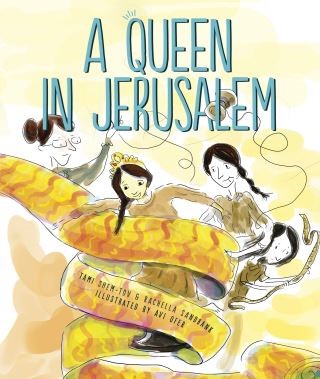 A Queen in Jerusalem

In Jerusalem, in the early 20th century, a little girl named Malka—"queen" in Hebrew—dreams of dressing up as Queen Esther. It is the festival of Purim, and all the kids are looking forward to celebrating in their costumes. But Malka's mother doesn't have time to prepare a Purim costume for her. Where can Malka get a costume in time for the holiday?

Tami Shem-Tov was born in Kiryat Ono, Israel, and lives in Tel Aviv. She teaches creative writing at the University of Haifa. Her previous children's books have won many awards, including an Andersen Honor and the Bialik Prize.

Rachella Sandbank is the children's and young adult books editor at Keter Books, one of the leading publishing houses in Israel. She lives in Hod HaSharon, Israel.

Illustrator and animation director Avi Ofer creates projects for a variety of media, including book and editorial illustration as well as direction of animated films. He has exhibited in art shows and screened in festivals around the world. He lives in Barcelona, Spain.