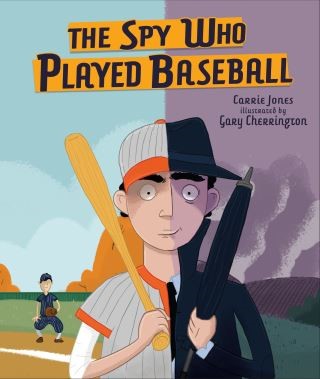 The Spy Who Played Baseball

Moe Berg is not a typical baseball player. He's Jewish—very unusual for the major leagues in the 1930s—has a law degree, speaks several languages, and loves traveling the world. He also happens to be a spy for the U.S. government. When World War II begins, Moe trades his baseball career for a life of danger and secrecy. Using his unusual range of skills, he sneaks into enemy territory to gather crucial information that could help defeat the Nazis. But he also has plenty of secrets of his own. . .

Carrie Jones is the New York Times bestselling author of the NEED series and spends her time in Maine where she lives with her family, which includes a kitten named Sparta, an obese cat, and two very silly and very large white dogs. She has won numerous awards for her writing and photographs, but she would prefer to win cowboy hats.

Gary Cherrington has always daydreamed and drawn from his imagination. A former touring puppeteer, he illustrates from his studio in Brighton in the United Kingdom.