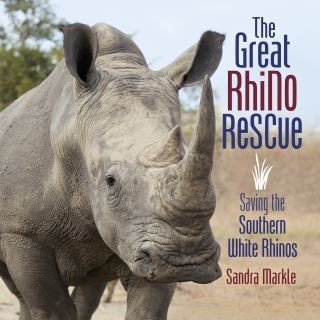 Southern white rhinos are in trouble. For years, a rumor has been spreading that their horns can be used to cure cancer, and poachers have been targeting these gentle creatures. Sandra Markle takes readers behind the scenes to see how civilians, volunteer organizations, and African governments are working together to protect rhinos.

Sandra Markle is the author of numerous award-winning books for children. A former elementary science teacher, she is a nationally-known science education consultant.

Markle is also the author of the Insect World series and several single titles. Her book Rescues! was named a Best Book by the Society of School Librarians International and a Recommended Title of Outstanding Nonfiction by the National Council of Teachers of English’s (NCTE) Orbis Pictus Award committee; Animal Heroes was named a 2008 Lasting Connections title by Book Links.