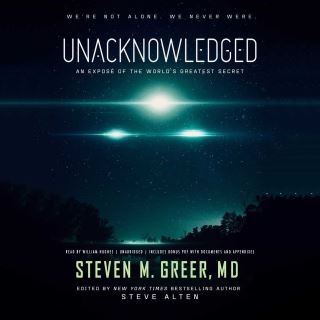 An Expose of the World's Greatest Secret

The biggest lie in history is about to be shattered.UFOs are real. In late June of 1947, three extraterrestrial craft were downed outside Roswell Air Force Base. Many more followed, revealing dozens of ET species and a Rosetta Stone to a new physics, an energy generation and propulsion system responsible for interstellar space travel. This new system could have easily replaced oil, gas, coal, and nuclear plants-and with them, the entire geopolitical and economic order on our planet. But a cabal of bankers, the military-industrial complex, and Big Oil stopped it.We have been lied to. And now, seventy years after Roswell, the witnesses to that lie have come forward to testify in a must-read book that will shock the world.

Steven M. Greer, MD, is founder of the Disclosure Project, the Center for the Study of Extraterrestrial Intelligence, and the Orion Project and Sirius Technology Advanced Research. Father of the Disclosure movement, he presided over the groundbreaking National Press Club Disclosure Event in May of 2001, which has now been seen by close to a billion people. A lifetime member of Alpha Omega Alpha, the nation's most prestigious medical honor society, he retired as an emergency physician and chairman of the Department of Emergency Medicine at Caldwell Memorial Hospital in North Carolina to pursue disclosure of truly alternative energy sources. He is the author of many books and DVDs on the subject of UFOs and ETs and teaches groups throughout the world how to make peaceful contact with extraterrestrial civilizations.

Steve Alten is the New York Times and internationally bestselling author of more than twenty novels, including the Loch, Meg, Domain, and Mayan Prophecy series. His work has been published in more than thirty countries and is being used in thousands of middle and high school curricula as part of Adopt-an-Author, a free teen reading program used nationwide to encourage reluctant readers.

William Hughes is an AudioFile Earphones Award-winning narrator. A professor of political science at Southern Oregon University in Ashland, Oregon, he received his doctorate in American politics from the University of California at Davis. He has done voice-over work for radio and film and is also an accomplished jazz guitarist.