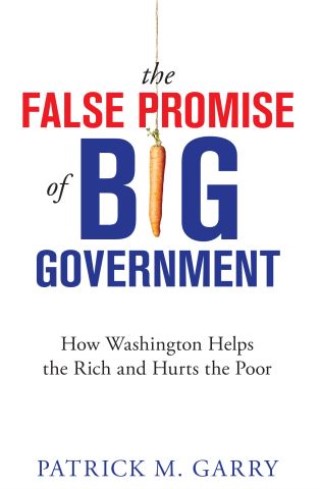 The False Promise of Big Government

How Washington Helps the Rich and Hurts the Poor

The debate over the size and scope of the federal government has raged from the New Deal right up through the 2016 presidential race. So why have opponents of big government so rarely made political headway? Because candidates fail to address the fundamental issues.

Patrick M. Garry offers a solution in this short, powerful book. Garry, a law professor and political commentator, reveals six ways in which big government hurts the very people its purports to help: the poor, the working class, and the middle class. And the problem is worse than that, he shows: big government actually props up the rich, the powerful, and the politically connected.

The False Promise of Big Government debunks the myth at the core of modern progressivism: that only government can help the average person prosper. The truth is that those who claim to speak for the “little guy” actually push for policies that harm the most vulnerable in society, and the proponents of limited government are, in fact, trying to free those individuals from a government that acts against their interests.

The False Promise of Big Government lays out everything you need to know about why big government fails and how to overcome it at last.

Patrick M. Garry:
Patrick M. Garry, JD, PhD, is professor of law at the University of South Dakota and the founder and director of the Hagemann Center for Legal and Public Policy Research. He is the award-winning author of several books, including Conservatism Redefined, which received honorable mention in World magazine’s Book of the Year awards. Garry writes frequently for both popular and scholarly publications and has testified before Congress on several occasions.