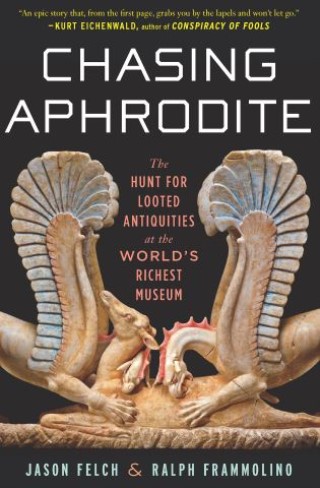 The Hunt for Looted Antiquities at the World's Richest Museum

A “thrilling, well-researched” account of years of scandal at the prestigious Getty Museum (Ulrich Boser, author of The Gardner Heist).

In recent years, several of America’s leading art museums have voluntarily given up their finest pieces of classical art to the governments of Italy and Greece. Why would they be moved to such unheard-of generosity? The answer lies at the Getty, one of the world’s richest and most troubled museums, and scandalous revelations that it had been buying looted antiquities for decades. Drawing on a trove of confidential museum records and candid interviews, these two journalists give us a fly-on-the-wall account of the inner workings of a world-class museum, and tell a story of outlandish characters and bad behavior that could come straight from the pages of a thriller.

“In an authoritative account, two reporters who led a Los Angeles Times investigation reveal the details of the Getty Museum’s illicit purchases, from smugglers and fences, of looted Greek and Roman antiquities. . . . The authors offer an excellent recap of the museum’s misdeeds, brimming with tasty details of the scandal that motivated several of America’s leading art museums to voluntarily return to Italy and Greece some 100 classical antiquities worth more than half a billion dollars.” —Publishers Weekly, starred review

“An astonishing and penetrating look into a veiled world where beauty and art are in constant competition with greed and hypocrisy. This engaging book will cast a fresh light on many of those gleaming objects you see in art museums.” —Jonathan Harr, author of The Lost Painting