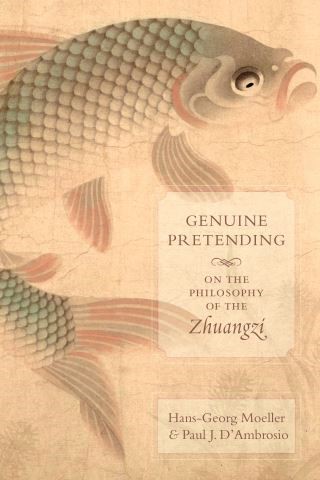 On the Philosophy of the Zhuangzi

Genuine Pretending is an innovative and comprehensive new reading of the Zhuangzi that highlights the critical and therapeutic functions of satire and humor. Hans-Georg Moeller and Paul J. D’Ambrosio show how this Daoist classic, contrary to contemporary philosophical readings, distances itself from the pursuit of authenticity and subverts the dominant Confucianism of its time through satirical allegories and ironical reflections.

With humor and parody, the Zhuangzi exposes the Confucian demand to commit to socially constructed norms as pretense and hypocrisy. The Confucian pursuit of sincerity establishes exemplary models that one is supposed to emulate. In contrast, the Zhuangzi parodies such venerated representations of wisdom and deconstructs the very notion of sagehood. Instead, it urges a playful, skillful, and unattached engagement with socially mandated duties and obligations. The Zhuangzi expounds the Daoist art of what Moeller and D’Ambrosio call “genuine pretending”: the paradoxical skill of not only surviving but thriving by enacting social roles without being tricked into submitting to them or letting them define one’s identity. A provocative rereading of a Chinese philosophical classic, Genuine Pretending also suggests the value of a Daoist outlook today as a way of seeking existential sanity in an age of mass media’s paradoxical quest for originality.