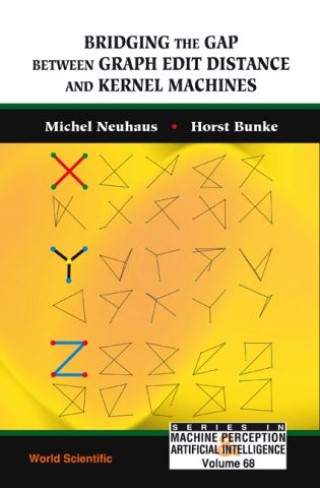 Bridging The Gap Between Graph Edit Distance And Kernel Machines

In graph-based structural pattern recognition, the idea is to transform patterns into graphs and perform the analysis and recognition of patterns in the graph domain — commonly referred to as graph matching. A large number of methods for graph matching have been proposed. Graph edit distance, for instance, defines the dissimilarity of two graphs by the amount of distortion that is needed to transform one graph into the other and is considered one of the most flexible methods for error-tolerant graph matching.This book focuses on graph kernel functions that are highly tolerant towards structural errors. The basic idea is to incorporate concepts from graph edit distance into kernel functions, thus combining the flexibility of edit distance-based graph matching with the power of kernel machines for pattern recognition. The authors introduce a collection of novel graph kernels related to edit distance, including diffusion kernels, convolution kernels, and random walk kernels. From an experimental evaluation of a semi-artificial line drawing data set and four real-world data sets consisting of pictures, microscopic images, fingerprints, and molecules, the authors demonstrate that some of the kernel functions in conjunction with support vector machines significantly outperform traditional edit distance-based nearest-neighbor classifiers, both in terms of classification accuracy and running time.