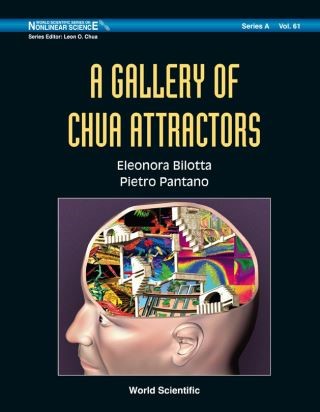 Gallery Of Chua Attractors, A (With Dvd-rom)

Chaos is considered as one of the most important concepts in modern science. It originally appeared only in computer simulation (the famous Lorenz equation of 1963), but this changed with the introduction of Chua's oscillator (1986) — a simple electronic circuit with the ability to generate a vast range of chaotic behaviors. With Chua's circuit, chaos became a physical phenomenon, readily understood and represented in mathematical language. Yet, even so, it is still difficult for the non-specialist to appreciate the full variety of behaviors that the system can produce.This book aims to bridge the gap. A gallery of nearly 900 “chaotic attractors” — some generated by Chua's physical circuit, the majority through computer simulation of the circuit and its generalizations — are illustrated as 3D color images, time series and fast Fourier transform algorithms. For interested researchers, also presented is the information necessary to replicate the behaviors and images. Finally, how the fractal richness can be plied to artistic ends in generating music and interesting sounds is shown; some examples are included in the DVD-ROM which comes with the book.The contents have also appeared in the International Journal of Bifurcation and Chaos (2007).