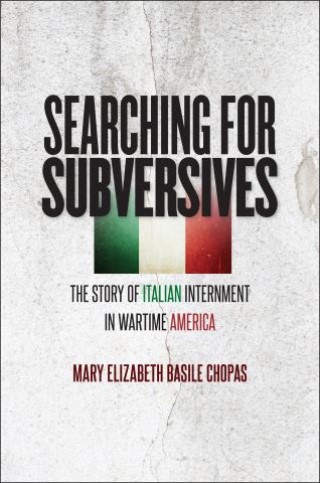 The Story of Italian Internment in Wartime America

When the United States entered World War II, Italian nationals living in this country were declared enemy aliens and faced with legal restrictions. Several thousand aliens and a few U.S. citizens were arrested and underwent flawed hearings, and hundreds were interned. Shedding new light on an injustice often overshadowed by the mass confinement of Japanese Americans, Mary Elizabeth Basile Chopas traces how government and military leaders constructed wartime policies affecting Italian residents. Based on new archival research into the alien enemy hearings, this in-depth legal analysis illuminates a process not widely understood. From presumptive guilt in the arrest and internment based on membership in social and political organizations, to hurdles in attaining American citizenship, Chopas uncovers many layers of repression not heretofore revealed in scholarship about the World War II home front.

In telling the stories of former internees and persons excluded from military zones as they attempted to resume their lives after the war, Chopas demonstrates the lasting social and cultural effects of government policies on the Italian American community, and addresses the modern problem of identifying threats in a largely loyal and peaceful population.