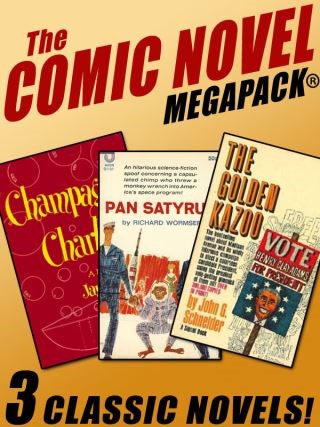 CHAMPAGNE CHARLIE, by Jay Franklin: When Charles E. Hoskins wishes for champagne and it suddenly materializes, he finds that his powers of conjure extend to all intoxicants. In the many predicaments this provokes, Charles is committed into the hands of a psychiatrist, escapes, decides to open up a bar but runs afoul of the union and later of Treasury agents, is summoned by Washington and is wanted as a good will gesture by the British Ambassador, is taken by the Russians who are about to deport him....

PAN SATYRUS, by Richard Wormser: The thirteenth chimp launched into orbit returns with the strange and sudden ability to speak...
THE GOLDEN KAZOO, by John G. Schneider: The bestselling novel about Madison Avenue and its wildly hilarious captaign to elect a colorless candidate President, using the greatest vote-getting gimmick of them all!

If you enjoy this ebook, don't forget to search your favorite ebook store for "Wildside Press Megapack" to see more of the 300+ volumes in this series, covering adventure, historical fiction, mysteries, westerns, ghost stories, science fiction -- and much, much more!