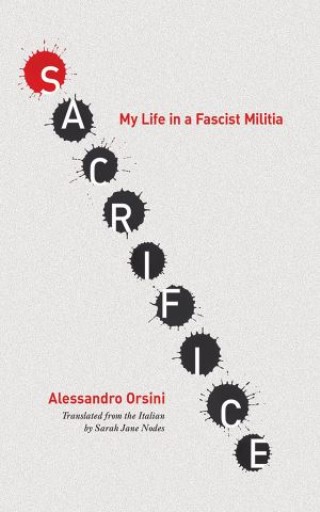 My Life in a Fascist Militia

Alessandro Orsini is one of Italy's premier analysts of political extremism. His investigation of the beliefs and mind-sets of Europe's political fringe has largely focused on anarchist and far-left groups, but in Sacrifice he turns his inquiry to the rapidly expanding neofascist movement. He joined local groups of a neofascist organization he names Sacrifice in two neighboring cities with very different political cultures. In this gripping, "insider" book, which features dialogues with various militia members, Orsini shows how fascists live day to day, how they understand their world, and how they build a parallel universe in which the correctness and probity of their attitudes are clear.

Orsini describes the long, troubled process by which these two groups slowly accepted him as an investigatoractivist and later expelled him for his ideologically uncommitted stance and refusal to subject his observations to censorship. His activities as a fascist were often mundane: leafleting, distributing food parcels to the indigent, and attending public rallies. In Sacrifice, Orsini describes from within the masculine ethos of the militias, the groups' relations with local police and politicians, and the central role of violence and anticommunist actions in building a sense of fascist community.

Alessandro Orsini: Alessandro Orsini is Director of the Observatory on International Security at LUISS University of Rome, Department of Political Science, and Research Affiliate at the Center for International Studies of the Massachusetts Institute of Technology. He is the author of Anatomy of the Red Brigades, also from Cornell.Sarah Jane Nodes is a translator who lives in Rome.