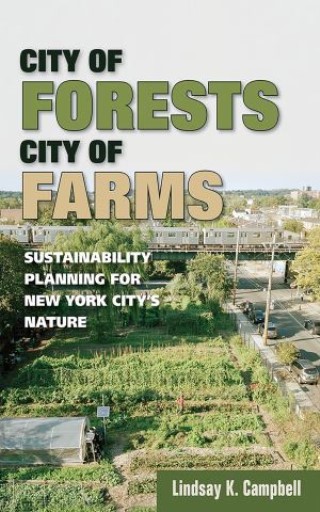 City of Forests, City of Farms

City of Forests, City of Farms is a history of recent urban forestry and agriculture policy and programs in New York City. Centered on the 2007 initiative PlaNYC, this account tracks the development of policies that increased sustainability efforts in the city and dedicated more than $400 million dollars to trees via the MillionTreesNYC campaign. Lindsay K. Campbell uses PlaNYC to consider how and why nature is constructed in New York City. Campbell regards sustainability planning as a process that unfolds through the strategic interplay of actors, the deployment of different narrative frames, and the mobilizing and manipulation of the physical environment, which affects nonhuman animals and plants as well as the city's residents.

Campbell zeroes in on a core omission in PlaNYC's original conception and funding: Despite NYC having a long tradition of community gardening, particularly since the fiscal crisis of the 1970s, the plan contained no mention of community gardens or urban farms. Campbell charts the change of course that resulted from burgeoning public interest in urban agriculture and local food systems. She shows how civic groups and elected officials crafted a series of visions and plans for local food systems that informed the 2011 update to PlaNYC. City of Forests, City of Farms is a valuable tool that allows us to understand and disentangle the political decisions, popular narratives, and physical practices that shape city greening in New York City and elsewhere.