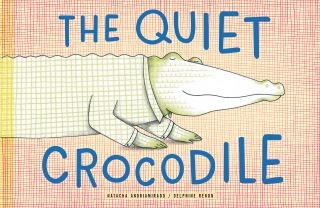 Fossil loves peace and quiet, and as much as he loves his friends too, sometimes they can be a bother. What happens when the noisy bunch comes by to play at nap time? Are crocodiles as fierce as they say? The Quiet Crocodile is an entertaining story with a surprising end that will engage both parents and children time and again. The lovingly drawn, charming illustrations are full of thoughtful details that offer something new with each reading. An added bonus are clever color dots that appear alongside the text for each new animal entering the story, introducing children to the concept of symbols and encouraging them to name colors as they count Fossil's many friends.

Natacha Andriamirado: Natacha Andriamirado studied philosophy at the Sorbonne before she turned her attention to writing. She is the author of I write for My Dog and Caracal.Delphine Renon is a graphic designer, based in Paris, who has illustrated ten children's books.