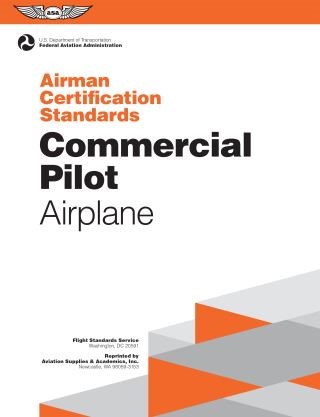 FAA-S-ACS-7, for Airplane Single- and Multi-Engine Land and Sea

The Airman Certification Standard (ACS) is the guide for aviation students, instructors, and FAA-designated examiners to know what pilot and industry license applicants must know, do, and consider for their FAA Knowledge Exam and practical (checkride), in order to earn a certificate or rating. This edition (FAA-S-ACS-7) of the new ACS, which became effective June 2017, replaces the previous FAA Practical Test Standards (PTS) and it is basically an enhanced version of the PTS. It adds task-specific knowledge and risk management elements to each PTS "Area of Operation" and "Task." The result is a presentation that integrates the standards for passing both the FAA Knowledge Exams and the FAA Oral and Practical Exams in a way that coordinates the study and learning for both, making them relevant to each other. This Federal Aviation Administration (FAA) Commercial Pilot – Airplane ACS provides the aeronautical knowledge, risk management, and flight proficiency standards for private pilot certification in the airplane category, single-engine land and sea, as well as multi-engine land and sea classes (ASEL, ASES, AMEL, AMES). This ACS incorporates and supersedes the previous Practical Test Standards (FAA-S-8081-12) for Commercial Pilot – Airplane license applicants.