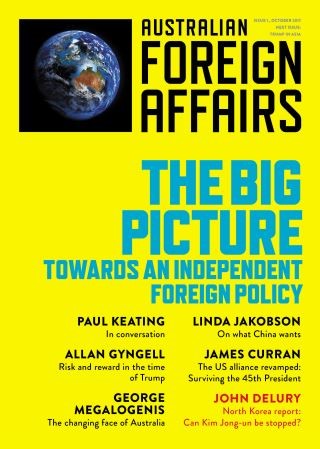 ‘We need to determine a foreign policy of our own – one that looks after Australia’s interest in the new order; an order which will have China as its centre of gravity.’ —Paul Keating

Paul Keating discusses changes occurring in the United States, Europe and Asia and how Australia should respond.

Allan Gyngell looks at the collapse of long-held beliefs underlying Australian foreign policy and the need to prepare for growing uncertainty.

George Megalogenis analyses Australia’s changing demographics and the rapid increase in migrants from China and India – a development that comes with both challenges and benefits.

Linda Jakobson examines China’s evolving reach and ambitions under Xi Jinping and what this could mean for Australia and the region.

The Big Picture is an essential exploration of Australia’s position in the world today.

‘Australia is increasingly affected by events beyond its borders, especially as global power and wealth shifts towards Asia. The challenges facing Australia and the region are varied and complex, but they are also fascinating. There is a strong need and appetite for a publication that explores these challenges and debates the ways Australia should respond.’—Jonathan Pearlman, Editor, Australian Foreign Affairs

Jonathan Pearlman: Jonathan Pearlman is the editor of Australian Foreign Affairs and is a correspondent for the Telegraph (UK) and the Straits Times newspaper (Singapore). He previously worked at the Sydney Morning Herald, covering foreign affairs and politics from Canberra and Sydney. He has worked as a correspondent in the Middle East, as well as covering various international stories, including the 2008 US election and the violence in eastern Congo. His work has appeared in numerous publications, including the Diplomat magazine, Good Weekend magazine, and the Australian Book Review, and he has been a Walkley Award finalist and United Nations Media Award winner. He was born in Sydney and studied at the University of New South Wales and Oxford University.