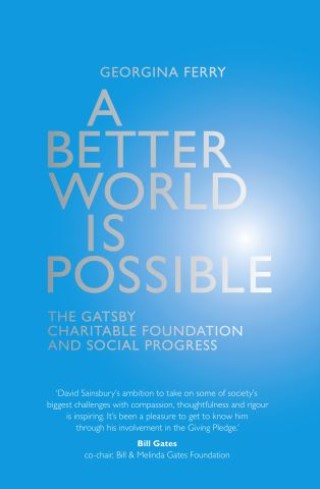 A Better World is Possible

On 17 March 1967, the 26-year-old David Sainsbury wrote out a cheque for £5 and established the trust which would become the Gatsby Charitable Foundation. Gatsby's purpose was ambitious: to make the world a better place by taking on some of the social, economic and scientific challenges that face humanity.

In recent years, Gatsby has spent around £50m annually on charitable activities, and by its 50th anniversary in 2017 it will have spent over £1bn on programmes that range from reducing poverty in Africa to raising the standard of technical education, investigating how plants fight disease, and finding out how the brain works. But despite Gatsby's wide reach and the level of its donations, it has always functioned discreetly and out of the public eye.

Georgina Ferry's in-depth account reveals its achievements and invites us to question how the super-rich - and even the moderately affluent - might spend their money more wisely and for the common good.

Georgina Ferry: Georgina Ferry is a science writer, author and broadcaster. She was a staff editor and feature writer on New Scientist, and presented science programmes on BBC Radio. Her biography of Britain's only female Nobel-prizewinning scientist, Dorothy Hodgkin: A Life (Granta 1998), was shortlisted for the Duff Cooper Prize and the Marsh Biography Award, and was reissued by Bloomsbury Reader in 2014. She has written five further books on 20th and 21st century science and history.