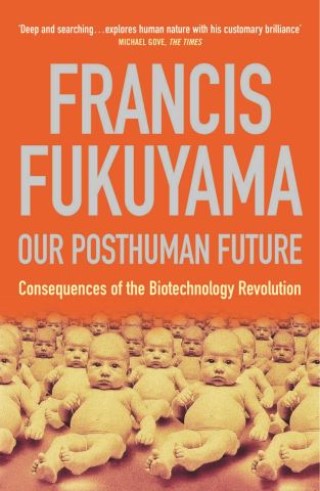 Consequences of the Biotechnology Revolution

Is a baby whose personality has been chosen from a gene supermarket still a human? If we choose what we create what happens to morality? Is this the end of human nature? The dramatic advances in DNA technology over the last few years are the stuff of science fiction. It is now not only possible to clone human beings it is happening. For the first time since the creation of the earth four billion years ago, or the emergence of mankind 10 million years ago, people will be able to choose their children's' sex, height, colour, personality traits and intelligence. It will even be possible to create 'superhumans' by mixing human genes with those of other animals for extra strength or longevity. But is this desirable? What are the moral and political consequences? Will it mean anything to talk about 'human nature' any more? Is this the end of human beings? Our Posthuman Future is a passionate analysis of the greatest political and moral problem ever to face the human race.

Francis Fukuyama: Francis Fukuyama is the author of The End of History, The Great Disruption, Our Posthuman Future, State Building,After the Neocons, The Origins of Political Order and Political Order and Political Decay. All have been hugely influential international bestsellers, translated and published in many languages. He is Olivier Nomellini Senior Fellow at the Freeman Spogli Institute for International Studies, Stanford.