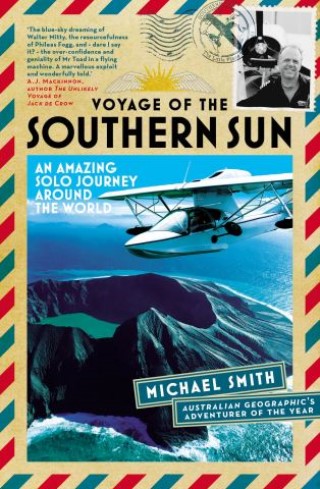 Voyage of the Southern Sun

An Amazing Solo Journey Around the World

Michael Smith spent 20 years restoring Melbourne’s beloved Sun Theatre and becoming one of Australia’s last independent cinema operators. He then set off on a rather different journey: to become the first person to fly solo around the world in an amphibious plane.

With limited flying experience, no support team and only basic instruments in his tiny flying boat, the Southern Sun, Smith risked his life to make modern aviation history. His adventures include an unexpected greeting by Special Branch on his arrival in the UK, a near-death experience while leaving Greenland, and a wondrous journey up the Mississippi. In just seven months he made eighty stops around the globe, exploring twenty-five cities and communities, and visiting some seventy cinemas. All along the way Smith updated his online journal, cheered on by 50,000 followers.

In 2016 he was named Australian Geographic's Adventurer of the Year.

‘The blue-sky dreaming of Walter Mitty, the resourcefulness of Phileas Fogg and – dare I say it? – the over-confidence and geniality of Mr Toad in a flying machine. Surely these literary figures were the inspiration for such an adventure. A marvellous exploit and wonderfully told.’ —A.J. Mackinnon, author The Unlikely Voyage of Jack de Crow

‘From near fatal tailspins, to watching bad movies in bizarre places, The Voyage of the Southern Sun is a ripping yarn that relives the days of Earhart, Lindberg and Kingsford Smith.’ —Jeff Maynard, Herald Sun

Michael Smith: Michael Smith is the owner of the Sun Theatre in Yarraville, Melbourne, which he bought in 1995 and restored, and a keen flyer. He made a full-length documentary about his record-breaking round-the-world flight, which will be screened around Australia. He was recently named the 2016 Australian Geographic Adventurer of the Year.