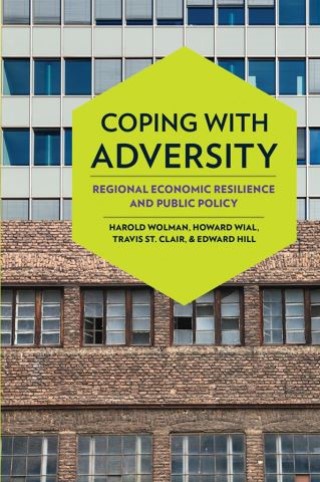 Coping with Adversity addresses the question of why some metropolitan-area regional economies are resilient in the face of economic shocks and chronic distress while others are not. It is particularly concerned with what public policies make a difference in whether a region is resilient. The authors employ a wide range of techniques to examine the experience of all metropolitan area economies from 1978–2014. They then look closely at six American metropolitan areas to determine what strategies were employed, which of these contributed to regional economic resilience, and which did not. Charlotte, North Carolina, Seattle, Washington, and Grand Forks, North Dakota, are cases of economic resilience, while Cleveland, Ohio, Hartford, Connecticut, and Detroit, Michigan, are cases of economic nonresilience. The six case studies include hard data on employment, production, and demographics, as well as material on public policies and actions.

The authors conclude that there is little that can done in the short term to counter economic shocks; most regions simply rebound naturally after a relatively short period of time. However, they do find that many regions have successfully emerged from periods of prolonged economic distress and that there are policies that can be applied to help them do so. Coping with Adversity will be important reading for all those concerned with local and regional economic development, including public officials, urban planners, and economic developers.

Harold Wolman: Harold Wolman is Professor Emeritus of Political Science and Research Professor, George Washington Institute of Public Policy, The George Washington University. He is the author of The Politics of Housing and coauthor of Urban Politics and Policy.Howard Wial is the former Director of the Center for Urban Economic Development at the University of Illinois at Chicago. He is coauthor of New Rules for a New Economy, also from Cornell, and coeditor of Urban and Regional Policy and Its Effects.Travis St. Clair is assistant professor at New York University's Wagner School of Public Service.Edward Hill is Professor of Public Affairs and City and Regional Planning at The Ohio State University. He was editor of Economic Development Quarterly and Chair of the Advisory Board of the Manufacturing Extension Partnership of the National Institute of Standards and Technology.