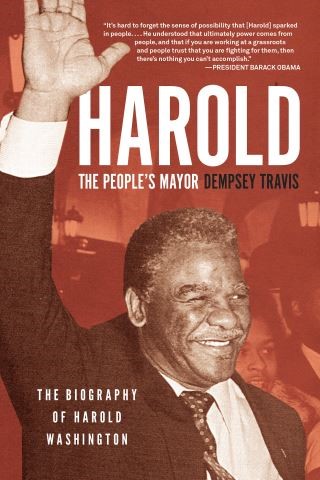 The Biography of Harold Washington

Harold, the People's Mayor is the authorized biography of Chicago's first black mayor, written by the late civil rights activist and prolific author Dempsey Travis, a man whose personal friendship with Washington spanned more than 50 years. Travis drew on recollections, notes, and several hundred hours' worth of interviews with Washington and his close associates in order to craft a portrait of Washington that spans his childhood, military years, political career, and death. Travis gained deep insights into Washington during the years he knew him, both as a boy and a man, and those combined with his encyclopedic knowledge of Chicago politics have resulted in an essential work of political biography and Chicago history.

Published to commemorate the 30th anniversary of Washington's untimely passing, this is a firsthand personal account of the life and career of one of the country's most significant big-city mayors and influential African American politicians, a man who former President Barack Obama credits as an inspiration.

Moving, comprehensive, and well-researched, Harold, the People's Mayor is required reading for anyone interested in 20th-century big-city politics and in this remarkable figure and how he lived, worked, and rose to transform the political landscape of Chicago.

Dempsey Travis: Dempsey Travis (1920–2009) was born and raised in Chicago. He was a real estate magnate, civil rights activist, jazz musician, and author. He graduated from Chicago's DuSable High School in 1939 and served in the US Army during World War II. He graduated from Roosevelt University in 1949 and received a degree from the School of Mortgage Banking at Northwestern University in 1969. He is the author of numerous works of political and cultural history and commentary, including An Autobiography of Black Chicago, which Agate reissued in 2013 as part of its Bolden Lives line. He was a contributing writer to Ebony and the Black Scholar, among many other publications.Clarence Page is a syndicated columnist and member of the Chicago Tribune editorial board. He won the 1989 Pulitzer Prize for Commentary. He first joined the paper in 1969, and he has been a member of the editorial board since 1984. He lives outside Washington, DC, with his wife and son.