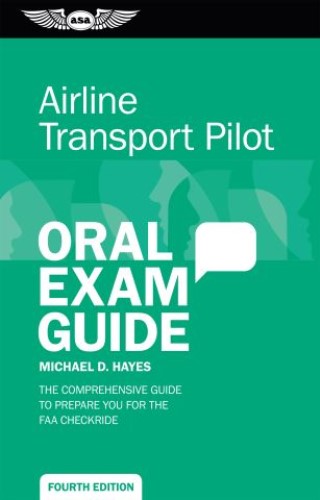 The comprehensive guide to prepare you for the FAA checkride

The Federal Aviation Administration (FAA) requires oral as well as written exams for pilot certification and flight review, and this guide teaches applicants not only what to expect on the test, but also how to exhibit subject mastery and confidence while under tough examiner scrutiny. In this test-preparation guide, the most frequently asked questions on the Airline Transport Pilot Oral Exam and their answers are provided along with sources for further study. License applicants who must pass this exam will benefit from the additional materials in this updated edition, including the latest FAA information and procedures that pilots need in order to be current with all FAA regulations. All the subjects an ATP candidate will be tested on during checkrides, career interviews, and aircraft transition rides are covered. Chapters are dedicated to turbine aircraft theory, performance and limitations, airline operational procedures, aeronautical decision making (ADM) and crew resource management (CRM), regulations, and instrument procedures. The book concludes with appendices with the questions and answers candidates can expect on an airline-type checkride concerning aircraft systems and limitations, specific to the Beechcraft 1900C aircraft, so pilots can learn the basic components and principles for the type of turboprop aircraft found in many of today's regional airline fleets. This section may also be used as a workbook, with space provided so readers can reference their airplane operating manual to fill in the blanks to the same questions asked about the BE1900C. Also, a new appendix has been added, the FAA's "ATP Airplane/Multi-engine Applicant Qualifications Job Aid" table to help candidates figure out what they need to fill requirements.

Michael D. Hayes: For Mike Hayes, flying started when he was 16 years old, and he has been flying for more than 40 years. He obtained his private pilot certificate in 1972 and acquired additional certificates and ratings in 1987. His aviation experience includes flight time in over 30 different types of aircraft, and the majority of instruction he has given has been in various models of Cessna, Piper, Mooney, Grumman, and Bellanca aircraft. He has been a flight instructor since 1988, instructing both full- and part-time for several large flight schools in Texas. Besides teaching, Mike has also worked as a corporate pilot and as a senior flight operations agent for a large regional airline. Prior to becoming involved in flight training, he worked for over 10 years in the telecommunications and information technology industry with extensive travel throughout the U.S. Mike is the author of ASA’s popular Oral Exam Guide Series for the Private, Commercial, Instrument, Multi-Engine, CFI, and ATP oral/practical tests.