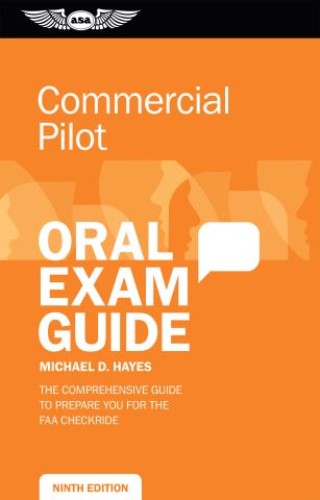 The comprehensive guide to prepare you for the FAA checkride

The Federal Aviation Administration (FAA) administers oral as well as written exams for pilot certification and flight review. These exam guides teach applicants not only what to expect, but also how to exhibit subject mastery and confidence under the scrutiny of the FAA Examiner. In this series, the most consistent questions asked in each exam are provided in a question-and-answer format, with information sources for further study. Applicants facing the Commercial Pilot oral exams will benefit from the topics discussed and the further study materials provided in this Commercial edition, which have been updated to reflect important FAA regulatory, procedural, and training changes. It also contains a chapter on the currently hot FAA topic of "scenario-based training" (SBT), written by Arlynn McMahon (author of "Train Like You Fly"). It provides insight into these more-complex questions on how to demonstrate one's grasp of the practical application of flight training. Scenario-based questions are now an integral part of FAA Oral & Practical Exams. A new appendix discussing the FAA categories of aircraft carriage has been added: AC 120-12, "Private Carriage vs. Common Carriage of Persons or Property."

Michael D. Hayes: For Mike Hayes, flying started when he was 16 years old, and he has been flying for more than 40 years. He obtained his private pilot certificate in 1972 and acquired additional certificates and ratings in 1987. His aviation experience includes flight time in over 30 different types of aircraft, and the majority of instruction he has given has been in various models of Cessna, Piper, Mooney, Grumman, and Bellanca aircraft. He has been a flight instructor since 1988, instructing both full- and part-time for several large flight schools in Texas. Besides teaching, Mike has also worked as a corporate pilot and as a senior flight operations agent for a large regional airline. Prior to becoming involved in flight training, he worked for over 10 years in the telecommunications and information technology industry with extensive travel throughout the U.S. Mike is the author of ASA’s popular Oral Exam Guide Series for the Private, Commercial, Instrument, Multi-Engine, CFI, and ATP oral/practical tests.