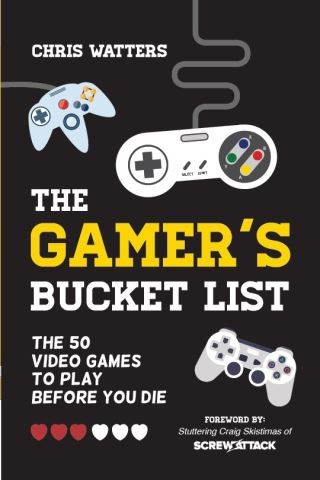 The 50 Video Games to Play Before You Die

Which games are worth playing?

From pixelated pioneer adventures to stunning space odysseys, the boundaries of the video game world are expanding every day. Grand epics and gritty mysteries. Fierce competition and friendly cooperation. Powerful emotions and uproarious laughter. Video games are fantastically diverse and wonderfully creative, but not all games are created equal. With so many games out there on so many different consoles, computers, and devices, how do you decide which games are worth playing? Backed by years of writing about games professionally and decades spent playing them, Chris Watters lays out a list of 50 games to entertain and enlighten you. Whether you’re trying to learn more about the world of gaming or strengthening your claim to true gaming fluency, these are the games you’ll want to play, and why you’ll want to play them.

Chris Watters: Chris Watters has been writing about video games for almost a decade. As an integral part of the editorial team at one of the most popular gaming websites, he has previewed and reviewed high-profile games, published numerous in-depth features, and scripted and presented a number of web series. He regularly hosts live stage shows with guests from all over the gaming world at events like E3, PAX, and Comic-Con. Chris majored in Spanish Lit at Wesleyan University and, while his knowledge of Don Quixote has yet to bear fruit, the language proficiency, analytical acumen, and Super Smash Bros. skills he acquired have been immensely helpful in his professional endeavors. Chris currently lives in Berkeley with his wife, Jill. He socializes on Twitter at @CTWatters, and wishes he owned a real-life incarnation of Missile, the plucky Pomeranian from Ghost Trick: Phantom Detective.Craig "Stuttering Craig" Skistimas is the owner and co-founder of Screwattack. He is well known for wearing his hat, and for being a former Slam Ball player. He started the company with friend Tom in 2006. As of September 2015, they have 2.3 million subscribers and over 600 million views.