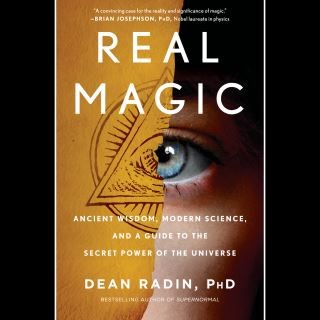 Ancient Wisdom, Modern Science, and a Guide to the Secret Power of the Universe

The chief scientist at the Institute of Noetic Sciences (IONS) turns a critical eye toward such practices as telepathy, clairvoyance, precognition and psychokinesis. Are such powers really possible? Science says yes.

According to noted scientist and bestselling author of The Conscious Universe, Dean Radin, magic is a natural aspect of reality, and each of us can tap into this power with diligent practice.

But wait, aren't things like ESP and telepathy just wishful thinking and flights of the imagination? Not according to the author, who worked on the US government's top secret psychic espionage program known as Stargate. Radin has spent the last forty years conducting controlled experiments that demonstrate that thoughts are things, that we can sense others' emotions and intentions from a distance, that intuition is more powerful than we thought, and that we can tap into the power of intention (think The Secret, only on a more realistic and scientific level). These dormant powers can help us to lead more interesting and fulfilling lives.

Beginning with a brief history of magic over the centuries (what was called magic two thousand years ago is turning out to be scientific fact today), a review of the scientific evidence for magic, a series of simple but effective magical techniques (the key is mental focus, something elite athletes know a lot about), Radin then offers a vision of a scientifically-informed magic and explains why magic will play a key role in frontiers of science.