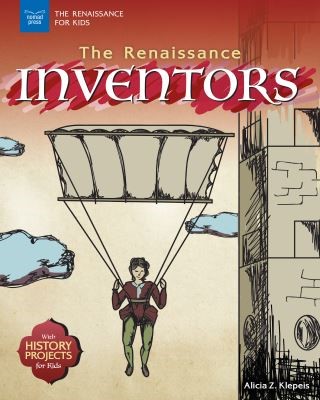 Why was the Renaissance such an important period of time in Western history? Who were the innovators who thought of the inventions we still use today?

In The Renaissance Inventors with History Projects for Kids, readers 10 through 15 explore the period of European history from the fourteenth to seventeenth centuries while focusing on the biographies of five inventors from that time and the creations they brought to the world. The lives of Leonardo da Vinci, Galileo Galilei, Leon Battista Alberti, Johannes Gutenberg, and Gerardus Mercator are brought to life as kids discover the challenges these men faced and the discoveries they made using their critical and creative thinking skills combined with their passion for science and engineering.

Imagine a world without inventors and scientists. How would people understand the environment around them? What new technologies would improve people's lives? During the Renaissance, inventors and other creative thinkers designed and constructed many new things, including a more accurate map that showed the spherical Earth on a flat paper, a printing press that brought books beyond just the realm of the rich, and a machine that measured the speed of the wind. In The Renaissance Inventors, readers learn about what it is to be an inventor, both now and in the past. They also discover how brainstorming and tinkering with everyday materials can lead to the development of great problem-solving skills, not to mention the creation of new inventions.

With 10 hands-on projects that use the engineer design process, kids create their own versions of many amazing inventions from the Renaissance. Activities such as making a parachute and creating a globe from an orange let middle schoolers stretch their inventive wings and learn what it’s like to be an inventor. Fun facts, primary source illustrations, fun STEAM activities, and links to online resources all spark an interest in the Renaissance. Even without a time machine, learners can experience the Renaissance!

The Renaissance Inventors is one of a set of four books in the Renaissance for Kids series. Books in the Renaissance for Kids series invite readers ages 10 to 15 to learn about the inventors, artists, explorers, philosophers, scientists, and politicians who lived in Europe and around the world during the Renaissance and who made contributions to the wealth of human knowledge and experience that have lasted far into the future. Primary sources, color photography, relevant quotes, and hands-on STEAM activities that promote the scientific method or engineering design process keep even the most curious kids satisfied!

Alicia Z. Klepeis is a children’s author of more than 70 nonfiction and fiction books. Her titles include The World’s Strangest Foods, Bizarre Things We’ve Called Medicine, and Explore Makerspace! With 25 Great Projects for Nomad Press. She has also written more than 100 articles in magazines such as National Geographic Kids and FACES. She lives with her family in Hamilton, New York.