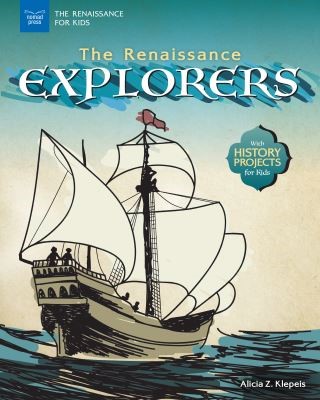 Who were the Renaissance explorers? How did they change the world?

Being a Renaissance explorer was both exciting and rewarding. But it sure wasn’t easy! Explorers in the Age of Exploration faced many challenges and dangers as their ships sailed into new and unfamiliar lands. Some explorers caught diseases, while others battled with native peoples over control of the territory. Without the efforts of the Renaissance explorers, the world as we know it might have been very different! Brave men such as Ferdinand Magellan and Niccolò de Conti ventured into uncharted territory around the globe and learned much about what lay beyond Europe and brought back an incredible wealth of information about this “new world .”

In The Renaissance Explorers with History Projects for Kids, readers ages 10 to 15 find out more about what it meant to be an explorer and follow the biographies of five famous Renaissance explorers, including Niccolò de Conti, Bartolomeu Dias, Vasco da Gama, Pêro da Covilhã, and Ferdinand Magellan, from their childhoods until their exhilarating days of scouting new-to-them lands. In addition to diving deep into the biographies of five Renaissance explorers, readers discover the skills and tools essential for these brave men as they crossed vast oceans and interacted with very different civilizations during the course of their journeys. Kids also find out more about the science and navigational techniques that made the Renaissance one of the most important periods for the discovery of new lands, peoples, and animals.

Using the engineering design process, kids develop critical and creative thinking skills with 10 STEAM activities, such making a compass that works and building a beacon like the ones used by Bartolomeu Dias and Vasco da Gama on their journeys. Fun facts, primary source illustrations, and links to online resources spark an interest in the Renaissance that goes beyond the boundaries of Europe. Even without a time machine, learners can experience the Renaissance!

The Renaissance Explorers is one of a set of four books in the Renaissance for Kids series. Books in the Renaissance for Kids series invite readers ages 10 to 15 to learn about the inventors, artists, explorers, philosophers, scientists, and politicians who lived in Europe and around the world during the Renaissance and who made contributions to the wealth of human knowledge and experience that have lasted far into the future. Primary sources, color photography, relevant quotes, and hands-on STEAM activities that promote the scientific method or engineering design process keep even the most curious kids satisfied!

Alicia Z. Klepeis is a children’s author of more than 70 nonfiction and fiction books. Her titles include The World’s Strangest Foods, Bizarre Things We’ve Called Medicine, and Explore Makerspace! With 25 Great Projects for Nomad Press. She has also written more than 100 articles in magazines such as National Geographic Kids and FACES. She lives with her family in Hamilton, New York.